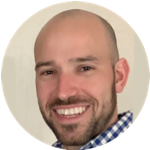 I build software products and teams. I helped launch early products at Doximity and Dropbox, reaching 80% of US doctors and 500M global users. I'm now at Chan Zuckerberg Initiative building tools for biomedical research. I hold bioengineering degrees from MIT and UC Berkeley.

Dr. von Muhlen, a health and wellness YouTube channel I built with my dad for the Brazilian market

What to know before building your first voice skill, based on a side-project I launched with a friend

We need a Github of Science, an essay from 2011 on how science communications can learn from Open Source